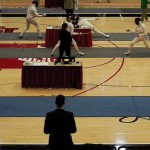 These are the pictures week took from the Collegiate fencing tournament in January 2013. 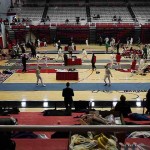 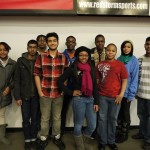 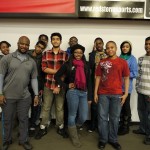 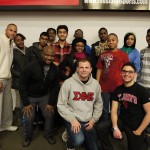 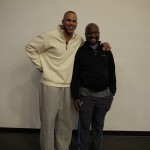 Woodside Fencing conducted an Epee Clinic which was presented by Christian Fach of Friedrichshafen, Germany. The first day all the coaches came eager to learn the importance of the German system. Fencing distance, the four basic tempos and timing were discussed. The coaches had the opportunity to practice 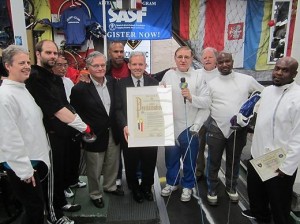 with each other and get additional lessons from Coach Fach.
During the four tempos it was stressed how the coach should give cues and exactly when the student should hit the coach’s target. The morning session ended and a catered lunch from a local Polish Deli was available for all. We all loved the sandwiches with meats, cheese and dill pickles. During that time a reporter from the Queens Chronicle newspaper reporter was on the scene to take part in the festivities. The NYC Councilman Jimmy Van Bramer gave a 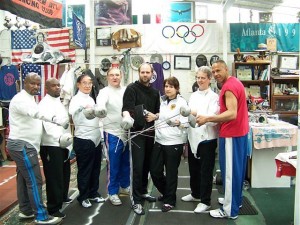 Proclamation to Woodside Fencing for all the work that is being done to teach inner-city children in public schools all over the New York City. Furthermore, Telemundo T.V. came and recorded the event for Spanish T.V. which will be aired in a few weeks on cable. All of the coaches and a few fencing students with parents came by to be part of the happenings. Mr. Jim O’Niell, President of Sports and Arts in Schools Foundation was also on hand to stress the importance of after school programs to the Councilman. SASF gives Woodside Fencing the opportunity to reach out to the schools and provide fencing instructions. After all formalities were over Coach Fach resumed the afternoon session where coaches practiced the morning drills and got hands on experience. At the end of the first session a competitive video was shown demonstrating how and when the moves are made in competitive real time.
At the second day there was a review of the first day’s discussion of distance, tempo and timing with hands on practice, followed by different blade work during 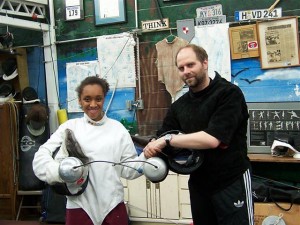 movement. All different attacks and defense were shown and practiced. Coach St. Clair Clement also covered the bind that he learned in Germany from Maestro Angelini an Italian fencing master. Toward the end we had an intense question and answer session covering how all of the fencing moves can be used in real fencing time. We thanked Coach Christian Fach and his student Jasmin Aron for presenting to us the German approach to teach fencing.
May 6th was our certification day. Our examiners were, Meistro Paul Sise, Prevost Ken Mondschein from Pioneer Valley Fencing Club and Prevost Steven Khinoy from Staten Island Fencing. Steven the publisher of SKA Fencing books 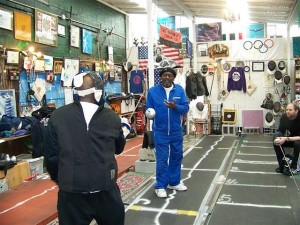 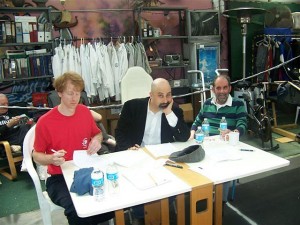 The mothers and fathers  were also very pleased to see such activity. Afterwards we all went to Donavan’s our local Irish Pub and had Guinness with the best chicken, lasagna and spaghetti for their next day of official USA fencing competition. The German team competed in five Epee tournaments in N.Y., N.J. and Long Island. They stayed at a house they rented in Brighton Beach, Brooklyn, N.Y. next to the ocean. All in all I believe it was a positive exchange for both the 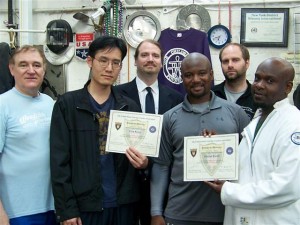 Clash of the Steel 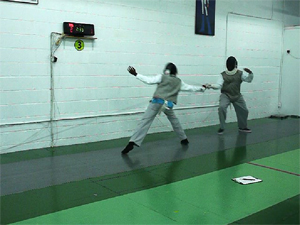 “Clash of the Steel” was created by Certified Foil fencing Instructor Moses Sistrunk, Jr. as a way of giving novice fencing students an opportunity to compete on a fencing facility against fencing students in other organizations who are on the same level.  Certified referees and directors facilitate the bouts and equipment is provided for them. The top group of competitors is rewarded with medals and trophies but most importantly they are rewarded with the experience.